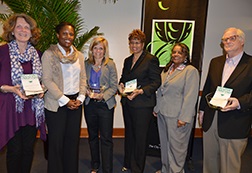 The AKAs have contributed numerous volunteer hours to local charities , program and events, including Haven House, the MSU Food Bank, MSU Safe Place, the Summer Solstice Jazz Festival, the East Lansing Folk Festival, the Winter Glow, the Race for the Place 5K Run, the Recycle! East Lansing event and more. The group has made tremendous contributions to Haven House, specifically, including $6,000 in cash donations; the purchase and donation of a number of urgent need items for the shelter; and special volunteer events, including ice cream socials, pizza parties, holiday events, a children’s carnival, back-to-school backpacks and school supplies, painting of all the bedrooms and more.

The AKAs have also supported local youth through education and scholarships, including scholarships to graduating seniors in East Lansing since 2004 and a partnership with MacDonald Middle School for the Emerging Young Leaders Program since 2011. The group also provided a scholarship to a Whitehills Elementary student to attend summer camp at Impression 5 Science Center in 2005.

The AKAs have made a difference in the lives of so many in the local community. They have provided or assisted with workshops on breast cancer and wellness, college preparation, CPR and emergency weather preparedness and are planning a Girls Summit for 2014. They have made a concerted effort to support education, women and children and families through various avenues and their recognition is well-deserved. They are a truly dedicated group of women who genuinely care about the success of the members of their community.

George Brookover
George Brookover is a quintessential civic leader who has earned the respect of countless people in East Lansing community and beyond. One community member described George best when she said “I believe there are people who hold together the foundations of a town, and there are people who add the spice to a town – rarely are those two key ingredients found in the same person.”

George grew up in East Lansing and his family has a history of known contributions to the East Lansing community. The apple did not fall far from the tree, as George took his early experiences and attachments to the community and has carried on his family’s legacy of giving back. In addition to his visible contributions to the community, George has done so much behind the scenes in promoting compromise on tough issues and helping people find common ground.

George’s service, generosity, dedication and love for East Lansing are evident in all that he does.

Pat Enos, Ph.D
Pat Enos, Ph.D has dedicated countless hours to town-gown initiatives in the East Lansing-MSU community, in an effort to spark connections and bridge the gap between diverse groups of community members. She has an impressive legacy of contributions to the East Lansing community through her career at MSU, her time as a Community Relations Coalition (CRC) board member and her commitment to the community as a resident of the Bailey neighborhood.

Pat was instrumental in the development of the CRC and MSU’s Community Liaison position, both of which have helped to orient the university outward towards the community and to significantly improve town-gown relationships. After helping to develop the CRC, Pat went on to serve as a founding board member and has been active on the board ever since – even into retirement. She has contributed to the growth and success of the CRC organization as a whole and to the development of dozens of students who have served in the CRC’s internship program. She also has been instrumental in the planning of a number of CRC events, including community conversations, the Taste of East Lansing, neighborhood cleanups and the annual neighborhood ice cream socials. In addition to her service with the CRC, Pat provided many years of leadership as a co-chair of the Celebrations Committee - a city-university group that works to anticipate and mitigate disorderly and destructive celebrations in the East Lansing-MSU community.

Outside of her involvement with many town-gown initiatives, Pat has been a long-time resident of the community, raising her three children in East Lansing, and has been a very active member and volunteer at All Saints Episcopal Church.

Pat deserves recognition not only for what she has done to build relationships in the community, but also for the number of people’s lives she has touched. Pat has empowered students to be a part of and take ownership of the East Lansing community and she has been a consummate supporter of the City, providing close to two decades of involvement. Her dedication, passion and interest in the lives of others have inspired many.

Jackson encourages its employees to embrace and be involved in the community through the establishment of special employee giving programs, including a “double match” program in which employee donations to local charities are doubled by Jackson National and a volunteer program in which each Jackson employee is given one paid day off a year to volunteer in the community. The volunteer program has resulted in more than 9,000 hours of community volunteer work each year by Jackson employees. The company itself also makes a number of large donations to different events and programs in an effort to support arts, culture and enrichment in the region.

East Lansing programs and charities that have benefitted from Jackson’s generosity, both monetarily and voluntarily, include, but are not limited to: the All-of-us Express Children’s Theatre, Art for Charlie, Wharton Center’s Seat 4 Kids Program, Butterflies in the Garden, the MSU Community Music School, Haven House, LAP Respite Center, the East Lansing Art Festival, the Great Lakes Folk Festival, One Book, One Community, WKAR’s Ready to Learn Service, MSU Athletics and the Burcham Hills Retirement Community.

It is no wonder that Jackson proudly totes the slogan “Jackson Involved.” They are a model company for community outreach and support.
Public Meeting Portal
Follow Local Meetings