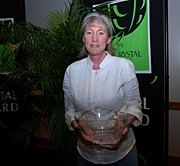 Marsha Bristor has dedicated 13 years of invaluable service to the community as a board member of the Friends of the East Lansing Public Library. Marsha spends approximately 30 hours a week volunteering at the library, where she manages the library’s used book shop – known as the Friendshop.

Marsha created a business model for the Friendshop, including establishing pricing based on researched book values and a shelving/volume management system. She can often be found spending countless hours pricing and shelving books at the library and helping to organize and manage the Friendshop volunteers. In particular, Marsha has utilized many local National Honor Society high school students, providing them with the opportunity to lend a hand at the Friends’ big weekend book sales at the library.

Marsha is a silent leader, in that she leads by example. Her hard work and enthusiasm has rubbed off on those around her and it is safe to say that she has been a huge contributing factor behind the Friendshop’s annual earnings of approximately $50,000 from used book sales and other fundraisers. These funds are vital to the East Lansing Public Library, which go toward materials, programs and encyclopedias for patrons.

Marsha is an extraordinary “friend” of the library, who has gone above and beyond to do so many special little things for members of staff and library volunteers. For example, she recently enthusiastically supported the purchase of iPads for the librarians and purchased a brand new coffee machine for the library crew to enjoy. The library – and the East Lansing community for that matter – would not be the same without quiet forces like Marsha Bristor at work within them. 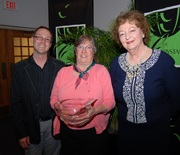 In its 52nd year on the banks of the Red Cedar River, the Summer Circle Theatre is the longest running live theater program in the region. An outreach program of the Michigan State University Department of Theatre, Summer Circle Theatre has presented 200 free summer plays to Greater Lansing audience members over the span of its 52 years. The plays are casual and sometimes unconventional, friendly to families and provide a great opportunity for arts and cultural enrichment during East Lansing’s beautiful summers. The program also supports MSU students and community actors, who are provided with the opportunity to exercise their craft.

Over the years, Summer Circle Theatre has become a popular summer evening tradition, where community members of all ages come together to picnic, play and enjoy free arts and cultural entertainment in a beautiful outdoor setting. The program is funded in part by the MSU Office of the Provost, the College of Arts and Letters and community donations, in a roughly 50-50 split. A community-based organization, Friends of Theatre at MSU, helps to raise the community donations, garnering more than $10,000 annually from more than 120 donors. Community businesses also support the program, including a major donor - the MSU Federal Credit Union.

In recent years, Summer Circle Theatre’s attendance has ranged from 3,000-4,000 people each year and over the past five decades the program has attracted an estimated 150,000 people to the performances. Among the attendees are a wide range of people, from young students to families to older citizens. Rain or shine, the banks of the Red Cedar River become a regional destination each summer thanks to the student and community actors, crew members and staff, board members, community supporters and businesses who work together to bring Summer Circle Theatre and the East Lansing community to life. 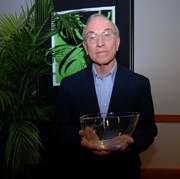 Dr. Dale Bartlett is a living example of the way members of the East Lansing community can, by their active involvement, share their talents to improve the quality of life for the entire community. Dr. Bartlett has a long history in the East Lansing community, a place where he raised his family, earned his bachelor and master degrees and was a faculty member of the MSU College of Music from 1969 until his retirement in 1996.

And next spring, Dr. Bartlett will complete his 30th year as conductor of the Arts Chorale of Greater Lansing. Founded in 1980, the group has always maintained deep ties to the East Lansing community, with fully a third of its 60 singers and 400 donors from East Lansing.

Starting as a fledgling community group of 16 singers, the Chorale has continuously increased its standards for performance and musical excellence under Dr. Bartlett’s leadership. As a gift to the community, the Chorale performs three formal concerts each year – all of which are offered free of charge to the public. In addition, the group has sung with the Lansing Symphony Orchestra and provided vocal accompaniment to both Andy Williams and Sarah Brightman at their Breslin Center concerts.

In appreciation for all the East Lansing-MSU community has given him, Dr. Bartlett has endowed the Helen R. Bartlett Scholarship in Choral Conducting in memory of his wife Helen, as well as the Dale L. Bartlett Scholarship in French horn. He also instituted a unique relationship with the MSU College of Music, through which the Chorale provides scholarships to three or four graduate music students each year.

Dr. Bartlett has completed a wonderful circle of life at MSU – going from student to valued faculty member to mentor and administrator to retirement and significant donor. He has provided rich musical experiences for singers and the community alike and continues to make beautiful music available and accessible to the Greater Lansing community as a whole. 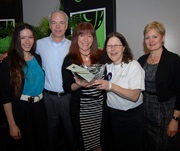 The Eric ‘RicStar’ Winter Music Therapy Camp began in June 2003 in honor of the life of Eric Richard Winter – an extraordinary little boy with cerebral palsy and a remarkable gift for music. Eric began participating in music when he was three years old and, for the next nine years, music was an integral part of his life. He had an insatiable appetite for music and music-making and it was from Eric’s great love for music, as well as the incredible dedication of his parents, Dick and Judy, that RicStar’s Camp was born.

The Camp, part of the Community Music School Music Therapy Clinical Services Program under the MSU College of Music, provides life-changing opportunities for musical expression, enjoyment and interaction for all people with special needs and their siblings in a welcoming summer camp setting focused on ability and inclusion. The Camp is dedicated to breaking down barriers, including its BuddyUp program in which each camper is placed with a peer without disabilities, allowing buddies and campers to develop friendships and an understanding of one another’s lives throughout the course of the three-day camp.

In 2003, the inaugural RicStar’s Camp welcomed 46 campers and, now, ten years later, it has grown to serve approximately 100 campers. In addition to the campers, 100 volunteers, 35 teen buddies and 10 certified therapy dogs are brought in for the Camp each year, along with talented guest performers from the MSU College of Music. The camp offers everything from one-on-one music lessons to dance classes, specifically tailored to those with disabilities, to opportunities for song writing and an end-of-week Be-A-Star Showcase where all campers get to perform.

The Camp attracts visitors from across the state and Canada, providing children with special needs, their siblings and parents an opportunity to experience and enjoy East Lansing. It brings to light the caring and all-inclusive community values that East Lansing upholds.