Michigan Avenue is a commercial corridor of regional importance economically, historically and culturally, and functions as a gateway to mid-Michigan and the entire State of Michigan. It also links downtown East Lansing, downtown Lansing, the State Capital and Michigan State University, while serving as one of the most important transportation arteries in the region. It is located between downtown East Lansing and Pere Marquette Street in Lansing. 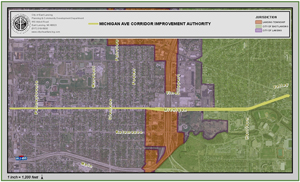 The revitalization project is a partnership between the City of East Lansing, City of Lansing, Lansing Township and Michigan State University. The ultimate goal of the project is to revitalize and beautify the Michigan Avenue corridor, to make it more walkable, connect a multitude of employers and cultural resources and create a pleasant living environment for surrounding neighbors.

Conceptual Development Plan
Adopted in 2008, the document outlines corridor vision and goals and serves as a foundation for the Michigan Avenue Corridor Improvement Authority. The main goal is to improve Michigan Avenue from downtown East Lansing to Pere Marquette Street in Lansing.