Husband-and-wife team Howard and Vivian Ballein opened the business back in 1960 in a 2,000-square-foot space located across from the Michigan State University (MSU) campus on Grand River Avenue. The store has since expanded to 42,000 square feet of retail and warehouse space and a staff of 24 full-time and 50 part-time employees.

In its almost 50 years in the downtown, SBS has become a destination business for students, faculty and year-round community members with its full inventory of text books, MSU apparel, gifts, school supplies and more. The business has grown hand-in-hand with the university and has seen a lot of success over the decades due in large part to the faces behind the SBS sign. 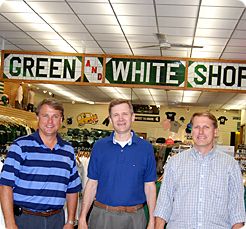 Howard and Vivian still have a hand in the day-to-day operations of SBS and their sons, Greg and Brad, have worked in the store since they were teens.

Why East Lansing?
“The key is that we are a locally owned business,” said Brad Ballein, a manager at SBS. “We take care of the little stuff and pay attention to our core business. That is what makes us successful.”

According to the SBS crew, other things that have contributed to the success of the business have included its close proximity to the MSU campus and its good relationship with the City of East Lansing. Several members of the store’s upper management have served on East Lansing boards and commissions, including the Downtown Development Authority, Downtown Management Board and Planning Commission.

This civic involvement has allowed SBS to have a hand in important decision making and planning that has impacted the downtown. Projects SBS has been involved with through its participation on East Lansing’s boards and commissions include the City Center I project, various parking facilities and other downtown infrastructure improvements.

“We have taken the time out of our lives to work with the City and vice-versa, the City works with us,” said Mike Wylie, assistant manager at SBS. “Our relationship and the City’s general support have benefited us greatly.”

Although SBS has grown both by way of square feet and employees, one thing has remained the same: the store remains an integral part of the community and is regarded by both patrons and staff as ‘much more than just a business’.