The East Lansing Rotary Club and the City of East Lansing partnered to raise community funds for the installation of a Medal of Honor Memorial in front of the East Lansing Hannah Community Center. The memorial, which was dedicated on Veterans Day on November 11, 2013, serves as a permanent memorial for 2nd Lt. Sherrod E. Skinner.

2nd Lt. Skinner is a local American war hero who grew up in East Lansing. He received the Congressional Medal of Honor posthumously for bravery exhibited during the Korean War. On the night of October 26, 1952, 2nd Lt. Skinner’s observation post was subjected to a sudden and fervent attack by enemy forces. During the attack, 2nd Lt. Skinner organized and directed surviving personnel in the defense of the outpost and left the protection of his bunker on more than one occasion to direct machine gun fire at the enemy forces and replenish depleted ammunition supplies.

2nd Lt. Skinner was wounded each time he left the bunker, but he steadfastly refused aid until his men received medical attention. In the end, 2nd Lt. Skinner threw himself on an enemy grenade in an effort to protect his surviving comrades, absorbing the full force of the explosion and sacrificing his life. He was awarded the Congressional Medal of Honor for his "conspicuous gallantry and intrepidity at the risk of his life above and beyond the call of duty."

The City of East Lansing and the East Lansing Rotary Club partnered to raise community funds for the installation of a Veterans Monument in front of the East Lansing Hannah Community Center. The monument was was dedicated on November 6, 2017. It honors all veterans from the East Lansing community who have bravely served in the United States military and memorializes those who gave their lives while serving.

The monument is located adjacent to the Medal of Honor Monument honoring 2nd Lt. Skinner.

Special thanks to all of the community sponsors and donors who helped in honoring our East Lansing heroes through their financial support of these important projects. The East Lansing Hannah Community Center is located at 819 Abbot Road. 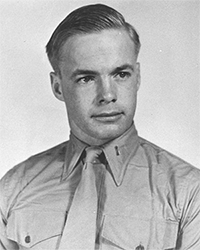 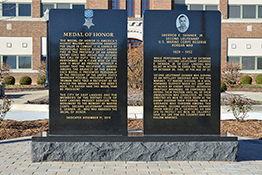 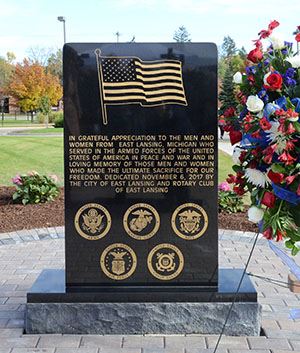 
Pool Schedule
Swim with Us