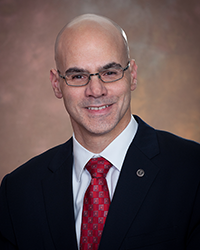 City Manager George Lahanas has served as the fifth city manager of East Lansing, Michigan since January 2012. In this leadership role, Lahanas has worked to strengthen the City’s financial foothold, establish stronger connections with East Lansing neighborhoods and prioritize environmentally friendly initiatives and programs for the sustainability of the community. Among his many accomplishments, George was instrumental in the community engagement surrounding the implementation of the East Lansing income tax and, prior to its passage, led the City through difficult financial times.
While George has served as city manager for the past seven years, his tenure with the City of East Lansing dates back more than two decades. From 1999-2011 he served in various capacities, including deputy city manager (2008-2011), director of Administrative Services (2005-2008), director of Human Resources (2001-2005) and, initially, as a labor relations specialist (1999-2001). In his more than 20 years with the City, George has distinguished himself by upholding a high standard of professionalism and strong work ethic; and, as city manager, he has proven to be a committed leader with the best interest of the East Lansing community at the heart of his work.

George’s educational background includes a master’s degree in Public Administration and a bachelor’s degree in Criminal Justice from Northern Michigan University. Before coming to the City of East Lansing, he served as a human resources coordinator for the Eastern Upper Peninsula Mental Health Board and, later, as director of administrative operations for the Shiawassee County Mental Health Board.

For George, the most rewarding aspect of serving the City of East Lansing has been the relationships he's forged with fellow employees and community members. He also takes pride in calling the East Lansing community home. He resides in the City’s Northern Tier with his wife, Shelley; daughters, Eleni and Marina; and dog, Monty.

Nicole Mosteller was hired to serve as the Assistant to the City Manager in August 2020. In this role, Nicole serves as a liaison between the public and City of East Lansing departments. She also represents City staff on the University Student Commission.

Nicole graduated from Michigan State University with a B.S. in Environmental Studies & Sustainability and an additional major in Sustainable Parks, Recreation and Tourism. Prior to being hired as the Assistant to the City Manager, Nicole was an Environmental Services Intern at the East Lansing Department of Public Works.

Nicole is excited to continue working for the City and serving the community in a new role. She looks forward to getting to know City staff and community members.
Public Meeting Portal
Follow Local Meetings